Pew survey: Half of U.S. Catholics pray every day, and the number is dropping

By Russell Shaw on Dec 16, 2021 07:41 pm
Although coming home for Christmas is a beautiful holiday tradition greatly to be cherished, it nevertheless occurs to me that leaving home for Christmas, correctly understood, is equally or even more important. When you think [..]
Read in browser »

By Dr. Adam A. J. DeVille on Dec 16, 2021 01:46 pm
Few things are more tedious, as a Catholic, than being accused of being a Puritan the moment one opens one’s mouth to talk about pornography. Those making such claims are almost invariably ignorant of the [...]
Read in browser »

By David Larson on Dec 15, 2021 10:52 pm
In November, the Centers for Disease Control (CDC) released information showing that, for the first time, over 100,000 Americans died in a single 12-month period from drug overdoses. Surveying our nation’s attempts to slow this [...]
Read in browser »

By Carl Kozlowski on Dec 15, 2021 06:59 pm
There have been far too many sequels and reboots coming out of Hollywood that are obvious money grabs. But “Ghostbusters: Afterlife,” out now in theaters and doing gangbuster business, while both a sequel and a [...]
Read in browser » 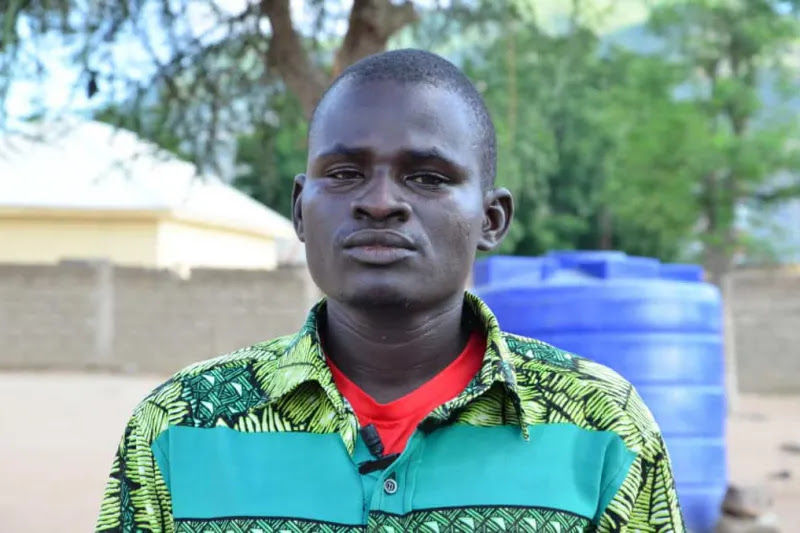 Charles, a 33-year-old father of a family who is a refugee at Pulka in Nigeria's Borno State. / Credit: Aid to the Church in Need

Not every Catholic priest risks mortal danger every time he visits his people. But a priest identified only as Father Christopher, who ministers in the Diocese of Maiduguri in Nigeria, risks his life daily to serve hundreds of refugees who have been displaced by terrorism.

The priest told Aid to the Church in Need (ACN) United States, a Catholic Pontifical charity foundation, last week that thousands of people who have been displaced by the Boko Haram terrorist group in Northern Nigeria are forced to live as refugees in tents, scattered around the small town of Pulka.

The priest noted that the refugees cannot stray far from the camps because of security concerns, and because of the difficulties in moving around during the rainy season. The town is located close to the border with Cameroon and some 75 miles from Maiduguri, the capital of Borno State in Northeast Nigeria.

“There are continuing attacks, and some people get killed. It is by no means easy, and it is not easy for me either, simply getting here,” Father Christopher told ACN.

“Coming and going is always a risk, but it is important to me to do everything I can to help these people.”

Father Christopher himself is currently living in an abandoned house, since Boko Haram destroyed his church and the rectory in Pulka in 2014, ACN reports.

ACN reports that many of the victims of Boko Haram’s campaigns of violence are still refugees in their own country, and face daily trauma and anxiety. There are some 30,000 internally displaced persons (IDPs) in Pulka alone.

“The danger has not passed, but the Church is bringing them consolation and hope,” the foundation says.

The foundation recounts the story of Naomi, a Nigerian woman who watched as her mother was killed and at one point was forced to “marry” a terrorist after being abducted. The image of Boko Haram’s brutality, Naomi told ACN, is still fresh in her mind and it causes her to experience nightmares.

“I don’t want there to be any night-time. I wish it was always daytime. My nights are full of fear, anxiety, nightmare,” Naomi says, and adds, “I get frightened as soon as night falls.”

Similarly, Charles, a young father of a family who is 33 and a refugee in the same place, also admits to having recurrent nightmares.

He told ACN in the December 13 report, “I relive the time when we were living in hiding. Since the terrorists used to attack by night, we would get out of the town as soon as night began to fall and hide in the bush. Many nights I still dream that I’m in hiding.”

ACN reports that Charles and Naomi are now living in one of the 20 refugee camps in Borno State.

“Muslims are a majority in Borno State… but Naomi and Charles are Christians. Without their faith, many people would have not been able to endure so much suffering,” Father Christopher said.

He explained that the Islamic militants first tried to frighten and threaten the Christians, trying to force them to convert. When that failed, they began to get more violent, he said, and added, “The priests had to hide in the mountains, but the insurgents of Boko Haram continued to harass and persecute the people.”

“Eventually, the situation became so difficult that between 2015 and 2016 many people decided to pack up their belongings and leave the country, crossing the frontier and seeking refuge in Cameroon.”

Naomi recounted fleeing to Cameroon and leaving everything behind.

“It was by no means easy,” she told ACN, and added, “Our feet were swollen and blistered, and it was too much for us. My sister was captured by Boko Haram, but she had a baby in her arms and that was the only reason they let her go. It wasn’t her baby, as it happens, she was only carrying it at that moment, but it saved her life. Many other people, like my mother, were murdered.”

In Minawao, Cameroon, alone, there were at one point more than 60,000 Nigerian refugees, the charity foundation reports, and adds, “They stayed there for several years, until the Nigerian army succeeded in recapturing the towns and villages … and persuaded them to return.”

However, the situation back home in Nigeria is still very precarious, Charles tells ACN, and explains, “We were refugees in Cameroon, then we returned and have been living here for two years now, but the situation is still unsafe.”

Naomi praised Father Christopher for working selflessly to restore hope among the refugees who had lost everything in the Boko Haram attacks.

“Life in Cameroon was so difficult that we thought we would never hope again,” she said, and added, “Father Christopher is a source of inspiration for us. When we are down, he gives us courage. He is a true father to all of us and is trying to fill the gaps in our lives left by our missing family members, because many of them were murdered. He cares for us as if we were his own family.”

Naomi continues, “God is providing and helping us, thanks to so many people around the world who have not forgotten us. We pray that God may give strength to all these benefactors and that you may be able to continue doing your work and supporting us.”

According to Naomi, Christmas is a particularly difficult time for the Catholic community in Pulka.

Charles, a father of four, adds, “Celebrating Christmas is hard in our situation. Most of us who once lived in Pulka, have lost everything.”

He continues, “The Gospel gives me the strength to face all this suffering and to endure everything we confront each day. Jesus Christ foretold the suffering that we are going through. Suffering is part of being Christian. Our lives are in His hands. I am filled with hope when I remember the words of Jesus, that He will reward us at the end of our lives. Jesus Christ is my salvation, and that is what I celebrate at Christmas.”

According to Naomi, what the refugees need most, as the rest of the world celebrates Christmas, are basic necessities such as food and medication.

“What we most need here is food, tents and clothing. We are even seeing some cases of cholera now and we don’t have any place to go for medical treatment. It would also be a gift to get help with our academic studies; some of us were students before the extremist attacks, and we had to give it up because we had no money to continue,” she says.

Father Christopher says his wish for Christmas is for many people to feel the desire to help the refugees in Pulka, and for them to regain their physical, spiritual and mental health.

He says, in reference to the refugees, “They long for peace in their lives, for peace to return to their homes. Our desire is a very simple one; we simply want to live a normal life and return to the life we had before.”

ACN reports that the foundation is seeking help for a range of projects to help the “uprooted” people of Pulka, who include around 14,000 Catholics.

The envisioned ACN projects include a borehole to provide water for the refugees, the rebuilding of the St. Paul’s Parish house in Pulka, so that Father Christopher can return to live there, and help 23 Catechists who are working among the refugees from Pulka, both in Nigeria and in Cameroon.

The Vatican’s unread newspaper and the U.S. bishops

By George Weigel on Dec 15, 2021 03:02 am
When I began working with some regularity in Rome thirty years ago, my elders and betters taught me that no one paid much attention to the Vatican newspaper, L’Osservatore Romano. The exception to that rule [...]
Read in browser »

By Carl E. Olson on Dec 14, 2021 11:50 pm
Tracey Rowland holds two doctorates in theology in addition to degrees in law and philosophy. After studies at the University of Queensland, she lectured in Soviet and Central European Politics at Monash University while completing [...]
Read in browser »

By Christopher R. Altieri on Dec 14, 2021 11:12 pm
If I were an airport fiction editor, and an author walked into my office with a pitch for a novel about a Vatican maxi-trial over $400 million in blue chip London real estate investment gone [...]
Read in browser »

By Brian Welter on Dec 14, 2021 03:46 pm
Reading Roger Scruton (1944-2020) leaves one with the feeling that we are too often underserved by less erudite and more superficial writers nowadays. The collection of essays in Confessions of a Heretic provides learned, robust, [...]
Read in browser »

Teaching a pastor to prepare the way of the Lord

By Father Jerry J. Pokorsky on Dec 14, 2021 02:49 pm
John the Baptist extols us to “Prepare the way of the Lord.” As we prepare for the Lord’s birthday, let’s consider a few voices crying out from the wilderness. During the 1992 Columbus Quincentenary commemorations, [...]
Read in browser »

Amid strikes and protests against Italy’s vaccine rules, a Catholic thinker warns of government overreach

By Rachel Hoover on Dec 13, 2021 09:45 pm
Last year, like many people, I craved more human voices in my locked-down life, and I turned to podcasts to fill the void. One day, the algorithms suggested an episode of some show called “Jimmy [...]
Read in browser »

On the genius and love of St. John of the Cross

“We have disregarded the fundamental principle of First Do No Harm.”

By Monica Seeley on Dec 12, 2021 10:37 pm
Dr. Monique Robles is a board certified pediatric critical care physician and bioethicist. She received her Doctorate of Medicine from the University of Texas Southwestern Medical School, Dallas, Texas, in 2001 and completed a pediatric [...]
Read in browser »

By Christopher R. Altieri on Dec 12, 2021 10:22 pm
Pope Francis should hold regular – maybe even weekly – press conferences. No, seriously. Given Francis’s history of getting in his own way during the in-flight pressers, the idea may seem counter-intuitive or even downright [...]
Read in browser »