Finnish Christian Prosecuted for Her Faith

More from Finnish Christian Prosecuted for Her Faith

We have blogged quite a bit about Dr. Päivi Räsänen, a medical doctor and member of parliament, and Rev. Dr. Juhana Pohjola, bishop of the Evangelical Lutheran Mission Diocese of Finland, a church body in fellowship with the Lutheran Church Missouri Synod, who were prosecuted for hate speech for putting out a booklet on what the Bible says about homosexuality.

A court found them innocent, but, in a country that doesn’t have the American Constitution’s protections against double jeopardy,  prosecutors are appealing the verdict, so the two are still in danger of being sentenced to two years in prison and a fine of one-third of their income.

While she awaits the decision of a higher court, Dr. Räsänen was a guest speaker at the Issues, Etc., conference at Concordia University-Chicago this summer.  Joy Pullman of the Federalist was there and interviewed her, leading to her article Prosecuting Paivi Rasanen For Quoting The Bible Is Making Her An International Star. 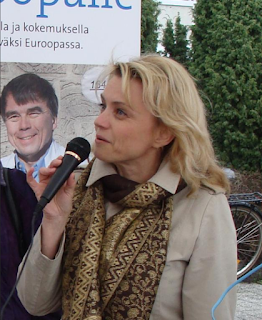 She notes that the booklet, Male and Female He Created Them, had few readers when it first came out in 2004 (seven years before the law they are charged with violating was passed), but the trials have caused it to be read throughout the world, in many translations.  (Click the link for the English version.)  Prosecutors discovered the booklet after she tweeted criticism of the state church for participating in a gay pride parade–a tweet that is one count of her indictment–subsequently trolling through decades of material searching for more “crimes.”  She was charged in 2019, her case dragging on for four years and counting.  As her lawyer commented after her acquittal was appealed, “As is so often the case in “hate speech” trials, the process has become part of the punishment.”

I urge you to read the Federalist story, which tells much more about Dr. Räsänen’s background, personality, and faith.  Here are some excerpts:

This woman of science also firmly believes in supernatural revelation. In her pamphlet on Christian marriage that Finland’s top prosecutor is seeking to ban as “hate speech,” Paivi writes that “Jesus’s death and resurrection is the core of the entire Christian faith. On this the Bible stands or falls. If one does not believe it, there is nothing left of Christianity. And … if I believe this, it follows logically that I must believe everything else Christ teaches in the Bible through the Apostles and Prophets.”. . .

Rather than rejecting homosexuals, as she’s been accused in court, Paivi glows with happiness when relating that gay people have disclosed her “Bible trial” has brought them to faith. In speeches and court testimony, Paivi has emphasized she not only bears no animosity toward homosexuals or transsexuals, she earnestly desires them to join her Christian family by receiving the eternal life that Jesus Christ offers freely to every person. . . .

“In all my career I have been known as a Christian and as a biblical Christian who doesn’t accept abortion and homosexual acts and so on,” Paivi told The Federalist. “And that’s why I think that perhaps it is the reason why the prosecutor has targeted just me.”. . .