That was the final verdict, but not before Cardinal George Pell endured a grueling five years of accusations, trials, conviction, humiliation, character assassination, and finally more than a year of imprisonment after being convicted by an Australian appellate court for a crime he didn’t commit. 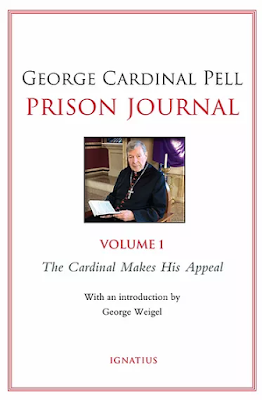 Immediately led off to jail in handcuffs and with shackles binding his ankles following that trial on March 13, 2019, the Australian prelate began a six-year prison sentence for “historical sex abuse”. After enduring more than 13 months in prison, eight of those in solitary confinement, the original sentence was overturned when Cardinal Pell was vindicated by an unanimous 7-0 decision rendered by the Australian High Court. His victory over an extreme travesty of justice was not just personal, but one for the entire Catholic Church.

Bearing no ill will to his accuser, judges, prison workers, journalists, and those harboring and expressing hate for him, the cardinal used his time in prison as a kind of “extended retreat” and eloquently filled pages with, among other details, his daily activities, personal thoughts, love for his fellow man, and beautiful, moving prayers.
at 19.8.20