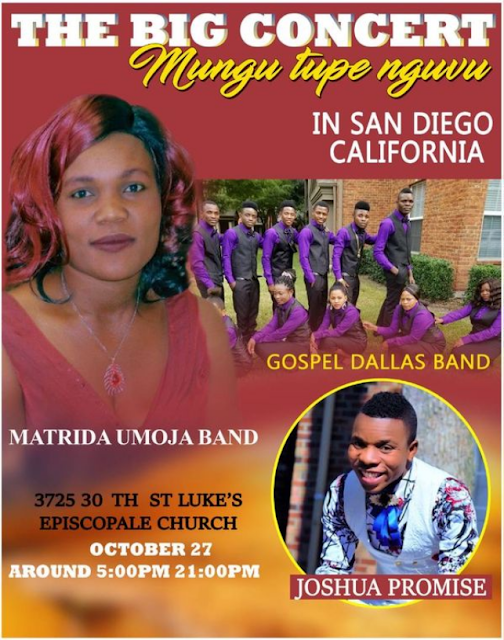 St. Luke's North Park is proud to present a special one-night performance of The Matrida Umoja Band, headlined by Matrida Taleshewi — a 30-year old single mother who arrived in San Diego as a refugee two years ago after spending nearly her entire life in Nyarugusu Refugee Camp in Tanzania.  She'll be joined by more than a dozen members of Joshua Promise, a Congolese band from Texas.  All proceeds from this event will benefit Matrida's up-and-coming musical career and her former refugee camp.


Buy your $25 tickets by clicking here now — they're selling fast!


Join us as The Matrida Umoja Band is officially introduced to the San Diego world music and gospel communities.  Matrida and her band will perform her original songs, filling the hall with joyful, inspiring spirituality and calls for umoja (unity) for all nations and people across the globe.  Matrida has invited Joshua Promise and other talented musicians from the Nyarugusu Refugee Camp (now living in Dallas, Texas) to join her. This will truly be a night to remember, as you fill your soul with upbeat African melodies and prayer-songs and help support Congolese refugees living in San Diego, Dallas, and Tanzania. (Click here for more information on the Nyarugusu Refugee Camp in Tanzania.)
at 18.10.18

Be a witness to Christ in your ordinary life