An Epiphany to Remember: US Capitol Besieged

An Epiphany to Remember: US Capitol Besieged

For the first time since the War of 1812 when the British besieged and burnt the US Capitol in Washington DC, the Capitol Building has been besieged.  Supporters of President Trump overwhelmed the capitol police this afternoon, disrupted the work of elected officials, and vandalized federal property.  Millions of us have been glued to the television all afternoon watching in utter amazement at pictures from our capital.

As I watch and listen, one phrase echoes in my mind: “words have consequences.”

Throughout its history, the United States has been known for the peaceful transfer of power when a new president is elected.  January 6, 2021, this Epiphany, will be a day to remember.  Rioters and looters have attempted to disrupt the transfer of power. 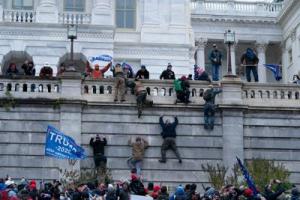 Earlier today Father Frank Pavone, head of Priests for Life and open supporter of President Trump, tweeted these utterly unbelievable words about what is happening today: “I do not want to hear one sanctimonious, self-righteous, hypocritical democrat complaining about what’s happening at the Capitol.  Until you can learn not to rip apart our republic by lying, cheating, stealing, & attempting a coup, then shut the hell up.”

This is where years of vitriol has brought us.  We are not better for it.

I pray for peace, for healing and for the ability for all to move forward in unity.

who crush wars and cast down the proud,

be pleased to banish violence swiftly from our midst

and to wipe away all tears,

so that we may all truly deserve to be called your children.

Through our Lord Jesus Christ, your Son,

who lives and reigns with you in the unity of the Holy Spirit,

one God, for ever and ever.