A Providential Meeting with Pastor Carlos

I really enjoyed eating and talking to a number of parishioners two weeks ago at the Cook-Out for the Kick-Off of the Fall Festival. I happened to run into Bruce Miller, by the providence of God. Bruce Miller was just a name I had heard about regarding some work he had already done in the basement and the crawlspace of the church about 20 years ago. I had tried to find Bruce online to no avail and had asked former pastors about him without any luck. I had no way of locating him. I wanted to talk to him and find out any advice he could provide for the work we’re doing.

Then the day of the cookout I saw someone with an explorer hat walking with an elderly lady toward me. He introduced himself as Bruce Miller. “Could it be the Bruce Miller?” I wondered with amazement. As I talked to him, it turns out he was indeed the same Bruce Miller. He had moved to Hawaii years ago, and was in town visiting his mother who still lives in North Park. Bruce shared about several projects he did over 25 years ago for drainage of our parking lot, and roofing repairs of the school. As I write this column, I am planning to meet later with Bruce to learn more about all the work he did for St Patrick’s. Let us keep him in our prayers with gratitude for all he did for the church and school.

The day of the Cook-Out was also the day that Fr. Phil started a new Bible study and leadership empowerment program with a number of parishioners who will become leaders in creating small groups. You might remember how I had mentioned some months ago about a small group program called Be My Witness, designed for parishes by Renew International, and which the Diocese had purchased the licensing for us to use it for 2 years. Be My Witness begins with a small core team for one year, and then the second year it grows into other small groups. I asked Fr. Phil to lead the program, and he decided to use content from it, but to adapt it with an Augustinian spirituality spin. He has named it Amici, which means friends in Latin, in honor of the fact that Latin was the language of St Augustine, and friends were a big part of his life. Thank you to the parishioners who accepted the invitation to be part of the pilot group. 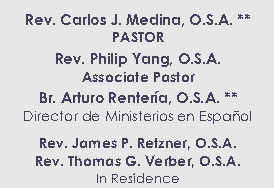