WISDOM OF THE SADHU 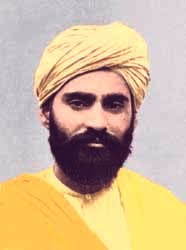 Excerpted from Wisdom of the Sadhu
Mourned by millions at his death, Sundar Singh (1889-1929) awaits rediscovery at the dawn of the 21st century. Though known in his lifetime as 's most famous convert to Christianity, that reputation is not entirely accurate, for he never accepted its conventions but gravitated instead to its stark original teachings.
Leaving the wealth of his home at sixteen to live as a sadhu, or wandering holy man, Sundar Singh's beggar-like existence, his intense bhakti (devotion), his mystical encounters with Jesus, and his simple yet profound parables became the stuff of legends. No one who met him - including the thousands who flocked to hear him during his visits to Europe, the Orient, and the - remained unaffected by this modern Saint Francis.

A Sufi mystic was on a journey. He had with him a quantity of wheat. After being on the road for several days he opened his bags and found a number of ants in them. He sat down and pondered over their plight. Being overcome with pity for the little lost creatures, he retraced his steps and returned them safely to their original home.

It is amazing how we humans can show so much sympathy to such little creatures. How then is it possible to lack sympathy and fellow feeling in our dealing with one another? Many have gone very far astray and do not know the way back. Surely it is our duty to guide the lost back to the way of righteousness and to help them find their eternal home.

There are many people in and around the world who would like to hear about the Master. These people need witnesses to the truth but not Western culture. Indians desperately need the Water of Life, but they do not want it in European vessels! The Master chose simple fisherman as his followers because he had a simple message, not a philosophy. The world has enough of teaching and philosophy.

What homesickness I had in ! I felt like a bird in a cage. The whole atmosphere was heavy for me. Many people thought I suffered from the cold climate, but this was not so. I have experienced far greater cold in the . It was not the physical atmosphere that oppressed me, but the spiritual atmosphere.

In , one feels everywhere - even through idols and altars, pilgrims and penitents, temples and tanks - that there is a desire for higher things. In the West, however, everything points to armed force, great power, and material things. It is this power of evil that makes me so sad. is more and more seeking the Master's truth. The West is in danger of becoming more and more indifferent. And yet the West owes so many of its blessings to Christianity. At one time the ostrich could fly, but because the ostrich stopped using its wings, it became unable to fly. So are the people of Europe and - they do not appreciate the faith of their forebears and are fast losing it.

The West is like Judas Iscariot, who ate with Yesu, only to later deny him. The West ought to fear the fate of Judas, lest it hang itself on the tree of learning. You have so many privileges. We in the East have to give up many things when we become Christians. For you, it is not so. Therefore be careful that you don't lose your only possibility for eternal happiness. I am reminded of the hunter who was pursued by a tiger. He had no fear because his hut was nearby and he was sure that he had the key in his pocket. On reaching it, however, the key was gone, and although there was only the thickness of the door between him and safety, he was lost.

Once when I was in the , I was sitting upon the bank of a river; I drew out of the water a beautiful, hard, round stone and smashed it. The inside was quite dry. The stone had been lying a long time in the water, but the water had not penetrated the stone. It is just like that with the "Christian" people of the West. They have for centuries been surrounded by Christianity, entirely steeped in its blessings, but the Master's truth has not penetrated them. Christianity is not at fault; the reason lies rather in the hardness of their hearts. Materialism and intellectualism have made their hearts hard. So I am not surprised that many people in the West do not understand what Christianity really is.

Many modern thinkers in the West do not believe in the miracles of our Master. To my mind, it's already a miracle that there are still spiritual people in the West at all. In , for example, one sees a good deal of Christianity, but it does not address the spiritual needs of the people. Just as salty seawater cannot quench thirst, much of American religion cannot satisfy a spiritually thirsty person because it is saturated with materialism. The Master's words, "Come unto me all who are heavy laden and I will give you rest," are true as regards the East, but I think that for America, he would say, "Come unto me all who are heavy gold-laden and I will give you rest."

Although America is a "Christian" nation and there are many sincere Christians in , the majority of the people there have no faith. There, where it is so easy to have religion, where religion is offered on every side and no one is persecuted for their beliefs, life should be peaceful. Instead, there is a mad rush and hustle and bustle after money and comfort and pleasure. In , many Christians suffer bitter persecution but continue to find happiness in their new faith. Because it is so easy to have faith in , people do not appreciate what a comfort there is in faith.

A scientist had a bird in his hand. He wanted to find out in what part of the bird's body its life was and what the life itself was. So he began dissecting the bird. The result was that the very life of which he was in search mysteriously vanished. Those who try to understand the inner life merely intellectually will meet with a similar failure. The life they are looking for will only vanish.

When I returned from , I began reading the writings of the German mystic Jakob Boehme and was attracted to him as soon as I had read the first two or three pages. This simple, uneducated shoemaker had an experience of God that has influenced millions of people. I may be wrong, but I am more and more convinced that simple people like Boehme have a pure intuition and grasp easily and readily the Master's profound spiritual truths. Educated people, especially those I met in the West, repress their native intuition and substitute in its place a kind of artificial rationalism. That is why the Master called simple fisherman as his disciples.

I studied theology in a theological seminary. I learned many useful and interesting things no doubt, but they were not of much spiritual profit. There were discussions about sects, about Yesu Christ and many other interesting things, but I found the reality, the spirit of all these things, only at the Master's feet. When I spent hours at his feet in prayer, then I found enlightenment, and God taught me so many things that I cannot express them even in my own language. Sit at the Master's feet in prayer; it is the greatest theological college in this world. We know about theology, but he is the source of theology itself. He explains in a few seconds a truth that has taken years to understand. Whatever I have learned has been learned only at his feet. Not only learning, but life, I have found at his feet in prayer.

I do not condemn theologians wholesale, but it is unfortunately the fashion in Western thinking to doubt and deny everything. I protest this tendency. I never advise anyone to consult theologians, because all too often they have completely lost all sense of spiritual reality. They can explain Greek words and all that, but they spend too much time among their books and not enough time with the Master in prayer. It is not that I oppose all education, but education without life is certainly dangerous. You must stop examining spiritual truths like dry bones! You must break open the bones and take in the life-giving marrow.