Many African American Christians say that the needs in the African American community are too great for them be missionaries to other ethnic groups. The black family needs life support. In 1963 25% of black births were out-of-wedlock. In 2010 it is 72% among non-Hispanic blacks, compared with 28% among whites1. Among single-race black householders, 44% are married2. In 2006 12% of the US population 13 and over was black, but accounted for 46% of those estimated to have HIV3. The Centers for Disease Control estimates in 2010 that 1 in 22 African Americans will get AIDS, compared with 1 in 170 whites4. A Pew study in 2008 found that among those 20-34 without a high school diploma/GED, 12% of whites are incarcerated, compared with 37% of blacks. The Pew study also showed that inmates of all ethnicities could expect a 40% lower income for the rest of their lives. Nationwide less than half of black males graduate from high school, compared with 78 percent of white males5. Summarizing health disparities, in 2007 the rate of death per 100,000 population was 958 among blacks and 749 among whites6.

Inner city ghettos are the sum of all African American fears. Disaster response would be expected to reach these fields of cultural catastrophe. In my limited experience, consisting of about 20 years of inner city ministry in Chattanooga, Tenn., I can count on one hand the number of Christian groups that I've actually met on inner city streets. I once encountered several white ladies from the Church of the Nazarene, observed a very effective outreach to youth of the Church of Christ headed by a white, mostly white Seventh Day Adventist college students reaching youth, and two parachurch ministries, one of them African American. I haven't encountered a group from an African American church (except those on our team). I know of four other local Africa American-led parachurch ministries to youth.

Yes, vans come from black churches on Wednesdays and Sundays to pick up some residents, but I don't find the black church's presence in the projects. Leroy Barber, African American president of Missionyear, where young adults spend a year in inner city Atlanta, says that African American participation in the program is about 5% or less7. Undeniably excellent inner city work is being done by African Americans. Pastor Larry Arnold, of Eagle's Nest Ministry in Atlanta, has faithfully served the inner city for many years, as has Alfred Johnson of Church of the Firstborn in Chattanooga8. A 1997 national survey of pastors of black churches found that 72% had "outreach" as one of their church's three annual priorities. Of those outreach subcategories, all except "prison ministry" could be done inside the church building. Another 15% of pastors had door-to-door evangelism as one of the three priorities, and15% had "bringing people to Christ."9

" Despite a march to stop black-on-black crime and school-based intervention programs, I didn't see groups coming to the Westside (our project) reaching teen dropouts of the kind most likely to continue the killings. A local black pastor with an excellent inner city ministry to ex-offenders doesn't know of more than ten black churches with an effective inner city ministry among the 200-300 black churches in our city. I don't know of more than 15 black or white churches (although there are certainly more) with a significant inner city outreach, out of the perhaps 800 churches in our county.

The church/projects disconnect mystifies due to markers of African American spirituality. A 2007 Pew Research Center Religious Landscape Survey found that 79% of blacks considered religion to be very important, compared with 56% of all American adults. Even among the 12% of blacks who weren't religiously affiliated, 45% said that religion is very important in their lives. African Americans exceeded the general population in weekly church attendance (53%), praying daily (76%), and in absolute certainty that God exists (88%). However only 15% of African Americans belong to evangelical Protestant churches--theologically prone to reach out to non-Christians10. Black church resources are often focused primarily upon their own church members--stake holders, some of whom may live in the inner-city. American churches generally, and black churches particularly, seem to have a "Come to us" mentality, rather than a "go" orientation. One black pastor in our area decided to get outside his church walls to where the people are, so he pitched a tent and preached to passers-by. On the church front lawn. Ministry seems to be what goes on inside the church. Faithfulness is showing up in church--a lot, and tithing. Perhaps fear paralyzes-- black-on-black crime is real. Maybe, having escaped the ghetto, the last thing wanted is to return--identifying downward.

The great majority of young men that I meet do not, and will not, attend church. Some haven't been to church for 10-20 years. This is remarkable, given that 87% of African Americans belong to a religious group11. More remarkable is that quite a few unchurched have a theologically credible profession of faith. I recently met two men in their mid-twenties and asked if they were sure they were going to heaven. Without prompting, they volunteered that they trusted Christ's death as the ground for their hope of going to heaven. They hadn't been to church in at least a dozen years. One said that the last time he attended a woman publically "prophesied" that he was a thief. I find not post-Christian spirituality (or post-secularism), but post-institutional Christianity.


Why? Over the years , these are the biggest reasons given: (1 they can worship God anywhere--they don't need church to pray or worship God or read the Bible (2 they see hypocrites in the church, including immoral pastors (3 they don't think that they have adequate church clothes (4 they don't have transportation. Unspoken reasons may include being looked down upon and gossiped about, and not wanting to be under authority, since most are co-habiting. Particularly among young men in the projects, I estimate that about 85-90% will not go to church, although nationally the figure for religiously unaffiliated African American men under 30 is 19%12. On rare occasions when some inner-city friends consent to go, they don't want to return.

About three churches have tried to start on the periphery of the Westside housing project in the past several years, but none lasted. One was well-funded for at least a year. The African American pastor's office was across the street from the projects and I happened to witness to a young man in his presence. He reflected that he never shared the Gospel with someone on the street like that, preferring meetings. Probably the best long-range method of reaching the unchurched is to bring "church" in small groups, developing from Bible studies and prayer groups. They don't have to change clothes, practice old rituals or sing church hymns. They don't have to leave the project boundaries, where they're more in control. The challenge is to find and disciple indigenous spiritual leaders to host and oversee the effort13. 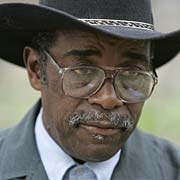 Success in the inner city is seeing lives changed by God. I've seen a little of this, and have trusted friends in the projects. I've found elements of a successful approach, but not "success". Focus upon one area and establish a presence over years. New City Fellowship of Chattanooga has done this in the Glenwood neighborhood, and Love Fellowship in Harriet Tubman Homes. Be consistent. Seed the area repeatedly with free modern language New Testaments that have a presentation of the gospel14. Since residents are often transient, keep distributing them. Ex-offenders were introduced to daily devotional booklets such as the Daily Bread15, and ask for them--distribute them. Use contextualized tracts16. Have a bi-racial or multi-racial team of both genders. Each race lends credibility to the other17.

Go to establish relationships, rather than one-shot gospel presentations. Learn people's "street names"--Snowcat, AC, Deon, etc. , and the current hand shake. Keep a record of names, addresses and phone numbers of those with whom you develop a relationship. Identify potential spiritual leaders among women and men and disciple them. Expect difficulty finding these leaders and expect difficulty discipling them on a regular basis. One way to disciple is to download messages that speak to areas of personal need in the disciple's life. John Piper has freely available materials by topic18. Print out verses on a particularly needed topic, without commentary. Meet felt needs. Some who don't want a New Testament will eagerly receive a list of job sources and training programs, including GED information19. Take guys to temp services or to job interviews. Get some fast food together. Show up at court hearings and visit them in jail. Help with emergency needs. Dress so that you don't stand out in the hood. Take time to get to know the gate-keepers, who take responsibility for what goes on. Pray with your team specifically for the work20. Expect testing--including discouragement, but God encourages.


Will the black church establish a redemptive presence in the projects, or write off several generations of the African American "underclass" living there--black-on-black neglect?21