Secularization, Marxism, and the Enlightenment in Augusto Del Noce

By Dr. Thomas R. Rourke on Jul 23, 2021 01:58 am
It is common today to hear people talk of secularization. It is particularly frequent in the discourse of people who see it as a problem. However, it is often the case that the term is [..]
Read in browser »

Young pro-TLM Catholics to Pope Francis: “Can we count on you?”

By Bree A. Dail on Jul 22, 2021 08:48 pm
VATICAN—A YouTube video featuring remarks by numerous young Catholics asks Pope Francis to reconsider the measures put forth in his recent motu proprio Traditionis Custodes (or “Guardians of Tradition”). The recent and controversial document severely [...]
Read in browser »

By Amy Welborn on Jul 22, 2021 02:34 pm
What is the greatest sin? According to the present papacy, “rigidity” is one, if not the most serious sin of which one can be accused. “Rigidity” – a closedness to change, a stubborn adherence to a [...]
Read in browser »

By Dawn Beutner on Jul 22, 2021 04:43 am
Mary of Magdala, Mary Magdalene, the Magdalene: whatever you call her, she has been one of the most beloved Catholic saints for almost two millennia. Artists have painted her portrait. Well, since she probably died [...]
Read in browser »

By Dr. R. Jared Staudt on Jul 22, 2021 03:01 am
Is there a Catholic way to dress? Well, there’s no Catholic uniform (at least apart from school plaid). An early Christian of the second century said as much when writing a letter to Diognetus: “With [...]
Read in browser »

By Paul Senz on Jul 21, 2021 07:14 pm
Kevin Wells’ career as an award-winning journalist and writer has led him to some varied work, from a focus on Major League Baseball at the Tampa Tribune to priestly biographer. His latest book is Priest [...]
Read in browser »

A bishop reflects on evangelization, Saint Joseph, and the crisis of fatherhood

By Jim Graves on Jul 21, 2021 06:08 pm
Auxiliary Bishop Timothy Freyer, 57, of the Diocese of Orange, California, was born in Los Angeles and grew up in Huntington Beach. He entered St. John’s Seminary in Camarillo, and was ordained a priest in [...]
Read in browser »

I take my non-Catholicism seriously: Reflections on not receiving the Eucharist

By Nathanael Blake on Jul 20, 2021 06:04 pm
I take my non-Catholicism seriously. This is, in part, because I have good reasons to become Catholic. My wife is Catholic, as are many of my friends and colleagues. I sometimes write for Catholic publications. [...]
Read in browser »

Traditionis custodes and the raw data on the Latin Mass

By R. Michael Dunnigan on Jul 19, 2021 09:08 pm
In Traditionis custodes, his recent apostolic letter on the traditional Latin Mass, Pope Francis repudiates his predecessor’s recognition that the Roman liturgy exists in two forms, the ordinary (the 1970 Mass of Pope St. Paul [...]
Read in browser » 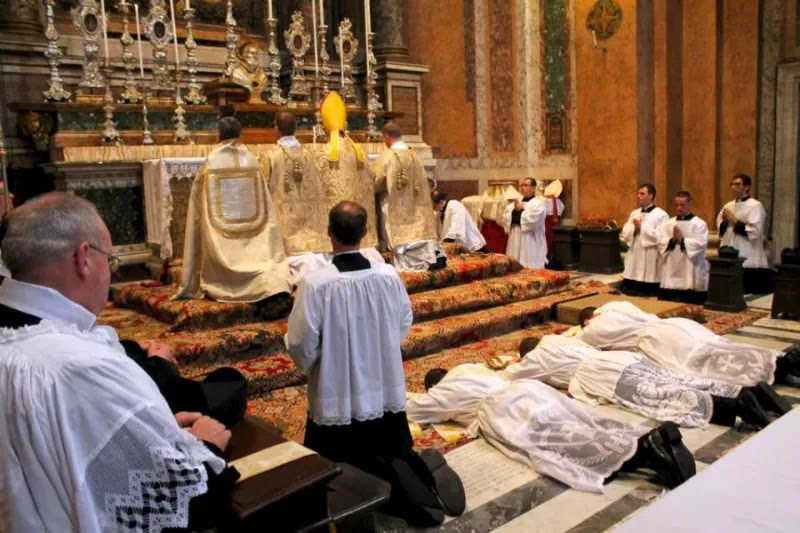 June 22,2013: The prostration of the ordinands during the Litany of the Saints at the Fraternity of St. Peter's Roman parish, Santissima Trinità dei Pellegrini in Rome / CNA

More U.S. bishops have issued guidance on the celebration of the Traditional Latin Mass in their dioceses, following a papal document that on Friday imposed restrictions on the use of traditional liturgy.

Archbishop Samuel Aquila of Denver, in a letter to priests of his archdiocese, has said that the celebration of the Traditional Latin Mass could continue as normal while he studied Pope Francis’ new motu proprio Traditionis Custodes (“Guardians of the tradition”).

The papal document, issued on Friday and effective immediately, allowed individual bishops the decision to authorize the use of the 1962 Roman Missal – which is in Latin – in their respective dioceses.

“At this time I need to study the document more, consult with the USCCB, and Canon Lawyers, before I make decisions on granting permission for the use of the Extraordinary Form of the Mass and the implementation of the norms given in the motu proprio,” Archbishop Aquila stated.

“I do not want to act precipitously on the document one way or another, since the limitations are great,” he added, informing priests that he would clarify the matter in an email in three weeks’ time.

“Until then things may proceed as they have,” he stated.

Other bishops from around the United States issued statements or responses in similar fashion over the weekend and into Monday, saying that they would study the motu proprio while allowing celebration of the Traditional Latin Mass to continue.

Pope Francis’ motu proprio made sweeping changes to Pope Benedict’s 2007 apostolic letter Summorum Pontificum, which had acknowledged the rights of all priests to offer Mass according to the Roman Missal of 1962, promulgated by Pope St. John XXIII. Traditionis Custodes states that it is a bishop’s “exclusive competence” to authorize the Traditional Mass in his diocese.

In addition, bishops with groups celebrating the Traditional Latin Mass in their dioceses are to ensure that the groups do not deny the validity of Vatican II, the document said. Bishops are to designate locations and times where Masses according to the 1962 Missal can be celebrated – but not at parochial churches. Readings at the Masses must be in the vernacular.

With questions arising as to the continuance of the Traditional Latin Mass in accord with the motu proprio, some bishops in the United States issued statements this weekend outlining the steps priests should take if they wish to continue offering the traditional liturgy in the short-term. The bishops said they needed to study the document to issue norms at a later date implementing its provisions.

Bishop Frank Caggiano of Bridgeport on Monday requested that all priests who offer the Traditional Latin Mass – including in private – write to him directly for temporary permission to continue doing so. He stated he would grant temporary faculties for private Masses, and hoped permanent norms to implement the document would be in place by the end of September.

Priests requesting permission to offer the Traditional Latin mass should include the date and time of the Mass, the celebrant, an approximate number of attendees, and an explanation of the pastoral need for the liturgy, he said. If the traditional liturgy has been offered on a regular basis at a particular location, priests should also say when regular celebration of the liturgy first began, he said.

As CNA already reported, the archdioceses of Oklahoma City and San Francisco, along with the dioceses of Arlington and Brownsville, allowed celebration of the Traditional Latin Mass to continue as normal.

The archdioceses of Baltimore, Boston, New Orleans, Philadelphia, and St. Paul-Minneapolis, as well as the dioceses of Charlotte, Lake Charles, Madison, and Pittsburgh are also allowing priests already celebrating Mass according to the 1962 Missal to continue doing so.

Bishop Donald Hying of Madison said that priests wishing to offer the Traditional Latin Mass could “presume” his authorization now, “but they should anticipate in the near future that I will ask them to contact me to request continued authorization,” he added.

Archbishop Bernard Hebda of St. Paul-Minneapolis said that priests wishing to offer the Traditional Mass should request authorization from him before the Solemnity of the Assumption.

Bishop Daniel Felton of Duluth stated on Friday that celebration of the Traditional Mass would continue at St. Benedict’s parish in Duluth; the situations at other parishes offering Mass with the 1962 Missal would “be examined on a case-by-case basis,” he said.

“As the Holy Father’s introduction notes, implementing these norms will take time. I encourage you to be mindful of the faithful who are devoted to the traditional liturgy and sensitive to their feelings at this time,” he said.

Bishop David O’Connell of Trenton said he authorized use of the 1962 Missal at five parishes, with a sixth permitted to offer the Traditional Latin Mass on First Fridays of every other month.

However, Bishop Anthony Taylor of Little Rock said that while two parishes administered by the Priestly Fraternity of St. Peter would not be affected by the document, the celebration of the Traditional Latin Mass would cease at other “regular parish churches” in the diocese.

In their statements, some bishops said they needed to seek more clarity on the motu proprio as they prepared to issue norms implementing the document.

“The nuances and implications of the Holy Father’s motu proprio need some clarification, and I will seek to understand fully what the Holy See is decreeing before making any definitive decisions,” Bishop Hying stated.

Bishop Glen John Provost of Lake Charles stated that he learned of the document “through media sources without prior official communication” on the same day it was issued and went into effect. He added that the document “will be studied in due course with the input of my canonical and liturgical advisors.”

Other bishops made statements specifically to Catholics who attend the Traditional Latin Mass.

“I want to assure all the priests and faithful of our diocese, especially those who may feel disheartened or discouraged by today’s developments, of my gratitude and support for your love for the Lord and the Church, your fidelity to the Gospel and the magisterium, your deep desire for holiness and your rich spirituality,” Bishop Hying stated.

“I love all of you as your shepherd and spiritual father.”

Catholicism in Mongolia: A small Church in the frigid land of Genghis Khan

By Ray Cavanaugh on Jul 19, 2021 04:39 pm
With temperatures often dropping under 40 degrees below zero, Mongolia is not an easy place for anyone. Nor has it been easy for the Catholic Church. The faith arrived in Mongolia in the 1300s, but [...]
Read in browser »

By Christophe Geffroy on Jul 19, 2021 12:50 pm
Incomprehension is the dominant feeling upon reading the motu proprio Traditionis Custodes and the accompanying letters to bishops. It is impossible to understand either the justification or the necessity of the text, especially because the [...]
Read in browser »

A father’s plea to the Holy Father: Reinstate Summorum Pontificum

An unnecessary and divisive motu proprio

By Peter M.J. Stravinskas on Jul 17, 2021 11:17 pm
We all woke up on Friday, July 16, to yet another example of Papa Bergoglio’s heavy-handedness with the promulgation of his latest motu proprio, Traditionis Custodes, reversing the legislation of his predecessors, St. John Paul [...]
Read in browser »

By Fr. Matthew MacDonald on Jul 17, 2021 02:22 pm
Editor’s note: This post is based on a homily given for the Apostoli Viae Investiture Retreat at the  Shrine of the Most Blessed Sacrament in Hanceville, Alabama for the Solemn Commemoration of the Feast of [...]
Read in browser »

By Catholic News Agency on Jul 17, 2021 12:50 pm
Thoom/Shutterstock. Denver Newsroom, Jul 17, 2021 / 10:50 am (CNA). A growing number of bishops in the United States, including Cardinal Wilton Gregory of Washington, have issued guidance regarding groups celebrating the Traditional Latin Mass i... [...]
Read in browser »

The remnant and the true shepherds